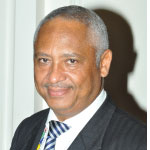 Jean-Jacques Massima-Landji is the International telecommunication Union (ITU) Representative for Central Africa and Madagascar , area office based in Yaoundé, since October 2009. He is responsible for 11 countries , and also coordinating all radiocommunication duties for ITU in the African region. Before he served for Gabon as special representative to ITU in Geneva 2005 to 2009. He has managed the Iraq project within ITU, Telecommunication development Bureau ( BDT) from 2000 to 2004 and was the first chair of the Regulatory Body in Gabon. Chairman and one of the first member of RASCOM board of directors in 1993 and 1994, he represented Gabon in various Telecommunications events and Conferences at different positions among those as central and then general manager of Telecommunications of Gabon from 1990 to 1998. M. Massima-Landji was graduated in Paris in 1983 , as Engineer in Telecommunications, Computer science and Electronics . He successively worked for CEA the French atomic energy Entity , joined OPT in Gabon as specialized engineer in data transmission, coordinated the creation switching packet technology networks in the region (Gabonpac, Sytranpac, Campac , before the Internet revolution etc..). He hold certification in English Proficiency and has gathered a wide experience of more than 33 years in the field of ICT and Computer science and regulatory and policies.